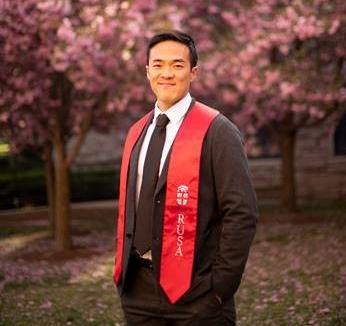 Seth Bae '18 is still processing his latest remarkable accomplishment. On the last weekend of May, at age 27, he received his bachelor's degree in International & Public Affairs from Brown University in Providence, Rhode Island. "I'm still reflecting on it. I've been looking back at old pictures from OCC and when I arrived at Brown. It flew by so quickly. It's like waking up from a dream."

Bae's journey from Korean immigrant to Ivy League graduate was fueled by hard work and determination. He arrived in Los Angeles with his family in 2010 and began learning the English language. When he started he only knew the alphabet and a few words. Three years later he would graduate high school and enlist in the United States Army.

He was stationed with the 10th Mountain Division at Fort Drum, about an hour-and-a-half north of the Onondaga Community College campus. During his time in the north country, he found a Korean Church in Syracuse he attended regularly. He liked the people he met there and decided to move to the Syracuse area after completing his service.

In the summer of 2017 Bae began taking classes at OCC. While earning a perfect 4.0 grade point average and membership in the Phi Theta Kappa honor society, he was heavily involved in campus life. He was an officer in Student Government, a VA Work Study student in the Office of Veterans and Military Services, a Peer Connector in the Advising Center, and a First Year Experience Mentor. He also worked as a Social Media Reporter on campus and presented a TED Talk on  Healthy Communication, sharing wisdom on how people can better understand each other and manage disagreements or conflicts.

In December of 2018 Bae was the student speaker at OCC's graduation ceremony. He encouraged his classmates to keep working hard and accomplish whatever they wanted. “You are here today because for the past two years, you committed yourself to what you believed in and dedicated your time and effort. Don’t let your present circumstances define your destiny and don’t let your doubts stop you from moving forward.”

Bae practiced what he preached at Brown and kept moving forward. He searched for a career path by trying a variety of classes outside of his academic focus, but it was an experience outside of class which gave him a destination. "I was completing a triathlon after my junior year and all of a sudden I thought 'maybe physical fitness or sports are my calling.'" He discussed the revelation with his mentor at Brown University who connected him with someone at Nike's corporate headquarters in Beaverton, Oregon. Their conversations led to Bae being hired by Nike. This month he'll move to Oregon and begin work as a Transition Specialist, a position which will require his high level of data analysis skills.

Bae's second college graduation and new career are the latest chapter in his amazing story, a story which he believes was made possible by his time at OCC. "If I had gone straight to an Ivy League school I don't think I would have done well. Being at OCC helped me redefine my background and purpose. I feel a responsibility to represent students like me who came through OCC."